It’s often thought that retrofitting homes and buildings to better withstand seismic activity and damage from earthquakes is an extremely expensive effort. Although unreinforced masonry (URM) failure is a main cause of death as well as the high price tag associated with quakes, it would be prohibitive to replace all buildings with earthquake-resistant structures. There are other options.

In the U.S., where there are 20,000 earthquakes per year, two states with the most seismic activity are attempting to mitigate damage via Federal Emergency Management Agency (FEMA) loans, grant monies, and special programs. Both Utah and California programs reinforce residential and commercial structures using effective, yet low-cost means of adding seismic strength. Masonry retrofit experts estimate that such subsidies can cut the cost of a seismic upgrade or retrofit by 60-70%.

In Utah alone, there are hundreds of thousands of structures in need of seismic retrofitting. The state typically sees 700 quakes annually. However, in 2020, the state has been hit by more than 728 earthquakes in the two weeks following the 5.7 magnitude mainshock that struck on March 18. Hundreds of thousands of structures across Utah are at risk.

California’s 10,000 earthquakes annually run the gamut from those too small to feel to major catastrophic events. Given that the San Andreas Fault extends 800 miles through the state, there is little doubt that the trend will continue.

Programs in both states to help home and property owners include:

One important aspect of a cost-effective method that fortifies buildings against seismic activity is adding strength to masonry. For example, a stainless-steel helical anchor by PROSOCO, the Stitch-Tie, is a pin that reattaches existing masonry façades to backup structures. The solution stabilizes veneers of brick, stone, masonry, or precast concrete, eliminating the need for full and expensive retrofits. 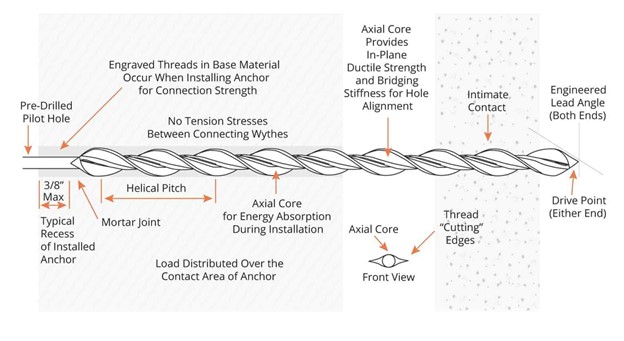 The helical tie is easily installed through the façade and into the backup structure, no matter the substrate. By connecting the whole building’s frame and exterior to the structure, when an earthquake jolt or shaking occurs, the structure has greater resilience and is more likely to withstand the quake.

Programs are currently available to assist homeowners. It is incumbent upon the owner, however, to make an application. For homeowners looking for assistance in starting the process of securing their homes against future seismic events, including finding a contractor or structural engineer in their area, call PROSOCO at 1-800-255-4255. We can help you get started on finding a simple and easy-to-install retrofit solution that could save your home.