The Dirksen Federal Building on Dearborn Street in Chicago – officially known as the Everett McKinley Dirksen United States Courthouse – is a carefully secured facility that has housed some of the nation’s most well-known court cases. This 30-story, Mies van der Rohe design -- built in 1964 – is just one of three buildings making up Chicago’s Federal Plaza complex. Two other Mies van der Rohe-designed buildings – the U.S. Post Office and the Kluczynski Federal Building – complete the complex.

Outside of this complex is a 44,000-square-foot granite plaza whose bi-annual cleanings are carried out by a federal contractor called Ada S. McKinley, a nonprofit that assists people who have disabilities in the Chicago community.

Via a new contract with the federal government, members of the organization led the charge of cleaning the plaza in June 2019 with a new product that could safely clean the granite substrate.

When Darren Rogers, senior director of janitorial services for Ada S. McKinley, sat down with government officials regarding the job, the expectation seemed simple enough.

“They wanted to get rid of the dirt and grit on the plaza,” he said.

Rogers said it took his crew of three some trial and error before landing on an application method and dilution rate that worked the best. 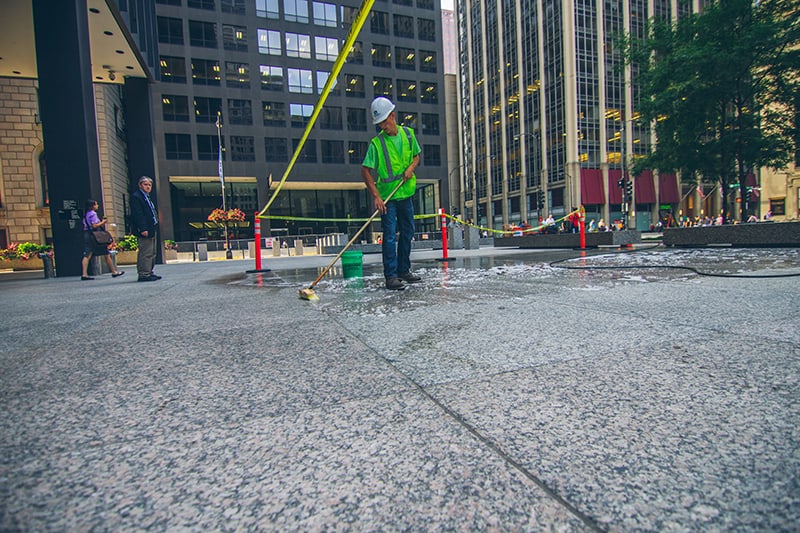 “Instead of using the sprayer, which we thought wouldn’t work that well, we put it in a mop bucket and we’re using a mop on it,” he said. “One of our supervisors had done this before, and he found the mop treatment to be more effective. You do what works the best, and it appeared to work.”

The crew started with a dilution rate of 3 gallons to 1 gallon of Klean ‘N Release Cleaner, and then moved on to a stronger dilution with 2 gallons of water and 1 gallon of cleaner to get the results they wanted.

They then utilized a 175-rpm floor scrubber to loosen the dirt and grime away from the granite surface.

For the most gratifying moment of any hard surface cleaning, Rogers and his crew used a pressure washer at no more than 300 psi pressure to rinse away the dirt and cleaning solution.

“Of course we know how to angle it to not damage the stone, and it’s working great,” he said.

It was in this step that Rogers said he realized exactly how dirty the granite plaza had become.

“We are finding there’s a lot of dirt on that plaza,” he said. “When you’re rinsing it, you can see the dirt just flowing off.” 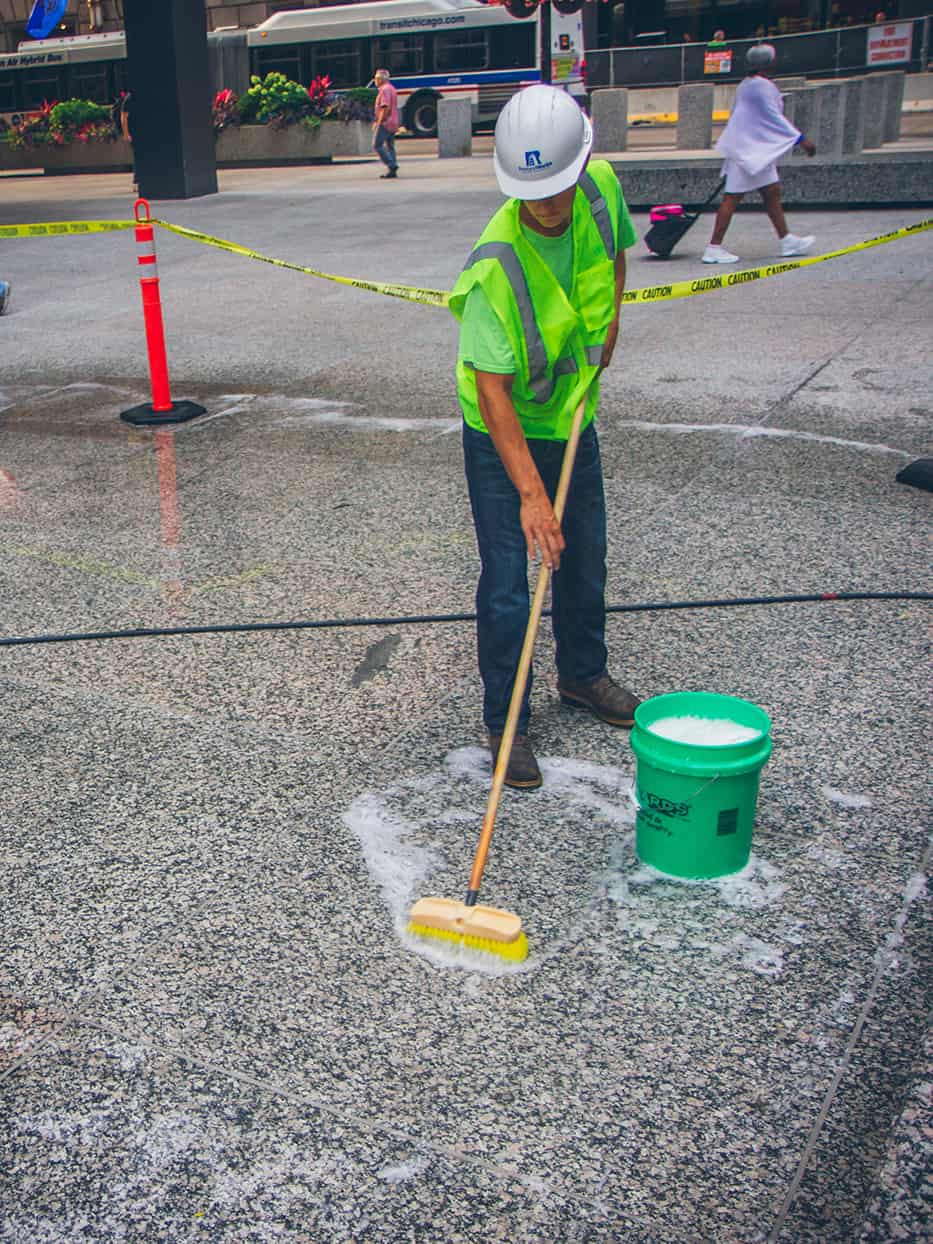 One attractive feature of Klean ‘N Release Cleaner for Rogers was its environmental profile – the product is one of few industrial cleaners on the market that’s certified with the EPA’s Safer Choice program and meets its direct-release criteria for products with outdoor uses.

Klean ‘N Release Cleaner is billed as an all-purpose cleaner that works on stone, tile, masonry, metal and other substrates, including on horizontal and vertical surfaces.

Formulated to be safer for people, the environment, plants, lawns, pets and wildlife, it also contains no colorants, phosphates, hazardous solvents or environmentally harmful surfactants.

All those features mattered to Rogers, who is familiar with the EPA’s Safer Choice program.

“We use green products to do these (federal) projects,” he said. “That’s why we’re trying to use something that’s safer.”